Heaven and Hell in the Present 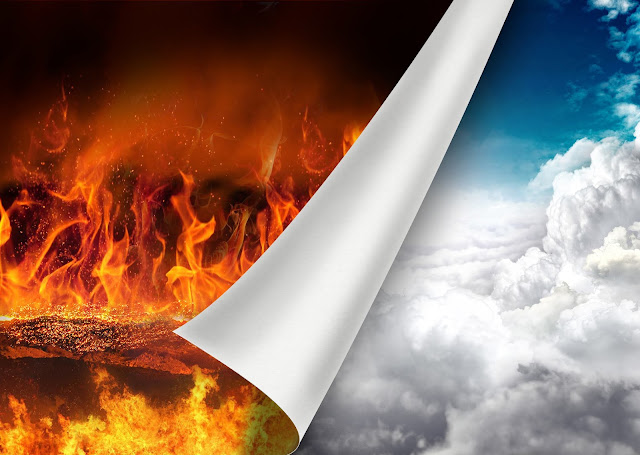 Q: Do you think that the current heaven/hell is a physical place?

A: When this question was first asked, I immediately thought I had the answer: nope! As it turns out, I think my immediate answer was off the mark. Consider the following Scriptures:

If you believe that Genesis is a literal history of the human race (which I do), then Enoch was a physical person who did not die but was translated (a fancy theological term--you could also say that Enoch was assumed as in "the assumption of Enoch"--which simply means was taken up to heaven by God) to heaven, in his present physical body.

A similar phenomenon happened to the prophet Elijah.

As they were going along and talking, behold, there appeared a chariot of fire and horses of fire which separated the two of them. And Elijah went up by a whirlwind to heaven. Elisha saw it and cried out, "My father, my father, the chariots of Israel and its horsemen!" And he saw Elijah no more. Then he took hold of his own clothes and tore them in two pieces. (2 Kings 2:11-12)

Elijah was taken to heaven by a whirlwind while still living in his physical body.

I suppose that it's possible that these Hebrew saints are simply floating about in some non-physical reality, or that God changed them along the way into some sort of spiritual body. Yet, these seem like strange conclusions.

So while I had this predominant idea that the current heaven is a non-physical place, the reality of these two men of God being taken to heaven in their physical state seems to contradict this notion.

Neither of these examples, however, are the most convincing. We must remember that Jesus, our Lord, rose physically from the dead. After His glorious resurrection, Jesus spent 40 days on earth appearing to many and even eating with them, and then He ascended into heaven. Listen to how the Word describes Jesus in His glorified state in heaven:

These are in accordance with the working of the strength of His might which He brought about in Christ, when He raised Him from the dead and seated Him at His right hand in the heavenly places. (Ephesians 1:19b-20, bold added for emphasis)

Prior to His death, burial and resurrection, Jesus taught His disciples that He was going to prepare a place for them (John 14:1-3). So, it seems that a physical and literal place is the best explanation for the current heaven. The Scriptures are less clear on the physical nature of the present hell, although the reality is no less terrifying whether this place is physical or non-physical!

Gehenna is certainly a physical place. Tartarus may or may not be a physical place as it is a holding place for angels (who are spirit-beings) and is most likely non-physical as even the chains are described as "darkness" and not some physical material (see 2 Peter 2:4 in the KJV, NKJV, and NRSV).

Sheol and Hades -- the current hell where souls of human beings await the judgment in conscious anguish -- could be either physical or non-physical. An example can be given that parallels the taking of individuals in their body to heaven, but instead being taken to Sheol:

"But if the LORD brings about an entirely new thing and the ground opens its mouth and swallows them up with all that is theirs, and they descend alive into Sheol, then you will understand that these men have spurned the LORD." As he finished speaking all these words, the ground that was under them split open; and the earth opened its mouth and swallowed them up, and their households, and all the men who belonged to Korah with their possessions. So they and all that belonged to them went down alive to Sheol; and the earth closed over them, and they perished from the midst of the assembly. (Numbers 16:30-33, bold added for emphasis)

So, it seems by the same types of Scriptural examples that there are physical, living people currently in both heaven and hell--along with the souls of individuals and also spiritual beings ... all of whom are awaiting the consummation of human history with the return of Christ. When Christ returns and ushers in the final state ("the Eschaton"), then there will be a new heaven, a new earth, and all of those whose names are not found written in the Lamb's book of life will be cast into the lake of fire in their physical, resurrected bodies (Revelation 20:12-15). It is interesting to note that Hades (Sheol from the Old Testament) will also be cast into the lake of fire along with the condemned humans and angels.

There is a second part to this question which will be dealt with in the next post in the interest of space. Feel free to leave your comments in the comments section and let me know if I've overlooked something!