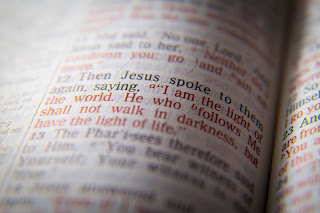 Q: In Matthew 17:10-13 they talk about John the Baptist being Elijah and needing to come again before Jesus did. I can't wrap my mind around this idea since it seems like reincarnation which I know God doesn't do (at least that I know of!). Can you explain?

A: Excellent question! I love that you are attempting to get at the meaning of the text, and what it seems to be saying is contrary to your understanding of the overall teaching of the Bible ... so what's the deal?

Do not be misled by Gnostic teaching. The New Testament speaks clearly against this group of heretics that arose shortly after Jesus' ascension to heaven.

O Timothy, guard what has been entrusted to you, avoiding worldly and empty chatter and the opposing arguments of what is falsely called "knowledge" (1 Timothy 6:20, NASB)

If we were to leave the word in quotations untranslated, that passage would read, "O Timothy, guard what has been entrusted to you, avoiding worldly and empty chatter and the opposing arguments of what is falsely called "gnosis" (emphasis added). The teachings of Gnostics were known to the Apostles. They rightly taught against it. Re-discovering old teaching with the Dead Sea Scrolls doesn't mean that the teachings suddenly become true.

Unlike wine, false teaching doesn't get better with age.

The passage in Matthew does seem a bit strange at first glance. We are not the first to be a bit confused by the truth that Jesus is revealing. In fact, John the Baptist (the one whom the passage is discussing) didn't quite understand it either.

Before we get into the passage, let's set the stage for why people are expecting Elijah to come in the first place. The last prophet we hear from in the canonical Old Testament is Malachi. Technically, John the Baptist is the last prophet of Old Covenant as the forerunner to the institution of the New Covenant by Jesus. But Malachi was the last writing prophet included in the Hebrew Bible ("Old Testament"). Malachi prophesied approximately 400 years before Jesus walked the earth:

"Behold, I am going to send you Elijah the prophet before the coming of the great and terrible day of the LORD." (Malachi 4:5, NASB)

Because of this prophecy the faithful Jewish nation was eagerly awaiting the coming of "Elijah." Is this an expectation of the reincarnated soul of Elijah to be "born-again" into another life? Is this what Jesus meant when he says that John was Elijah?

"Reincarnation is the religious or philosophical concept that the soul or spirit, after biological death, begins a new life in a new body that may be human, animal or spiritual depending on the moral quality of the previous life's actions" (http://en.wikipedia.org/wiki/Reincarnation). Reincarnation is a cycle of re-birth and re-death. The major problem with John the Baptist being the soul of Elijah beginning a new life after biological death is that Elijah never died!

As they [Elijah and Elisha] were going along and talking, behold, there appeared a chariot of fire and horses of fire which separated the two of them. And Elijah went up by a whirlwind to heaven. (2 Kings 2:11, NASB)

Read the account of Elijah's being taken up to heaven in the chariot of fire in 2 Kings 2 closely. You'll see that the "spirit" of Elijah rested on Elisha. Elisha was already alive and certainly couldn't be considered the "reincarnation" of someone who he watched ascend to heaven in a flaming chariot! Their lives overlapped one another.

Prior to the birth of John the Baptist, an angel prophesies to his parents how he will fulfill this ministry:

And he [the Baptist] will turn many of the sons of Israel back to the Lord their God. It is he who will go as a forerunner before Him in the spirit and power of Elijah, TO TURN THE HEARTS OF THE FATHERS BACK TO THE CHILDREN, and the disobedient to the attitude of the righteous, so as to make ready a people prepared for the Lord." (Luke 1:16-17, NASB)

John had an understanding of himself as "the voice" prophesied in Isaiah 40:3. When he was asked who he was this is what he identified himself as (John 1:21-27). He even denied that he was "Elijah" since he is not literally Elijah but merely operating in the "spirit and power" of Elijah as explained by Gabriel (Luke 1:17-19) like Elisha before him.

It is also very interesting that Elijah appears (along with Moses) just a few short verses before the passage in question in Matthew 17:3-4. It seems that Elijah is still very much himself. The text does not indicate anything close to reincarnation or that the soul of Elijah was born as John the Baptist and then reverted back to Elijah again to come and visit with Jesus on the mountain during the Transfiguration.

Jesus identifies the Baptist as Elijah to demonstrate that this was to be the expected fulfillment of the prophecy in Malachi (Matthew 11:14; 17:10-13).

A further consideration must be addressed. This was merely a partial fulfillment of a prophecy that still anticipates a future fulfillment.

In Revelation 11:3-6 we read of a description of "two witnesses." They have powers similar to what we witnessed in the ministry of Elijah ("the power to shut up the sky so that rain will not fall"; cf. 1 Kings 17-18; James 5:17) and Moses (the power "to turn water to blood" and "to strike the earth with plagues"; cf. Exodus 4:9; 7:17-21; 9-11). While they are not named explicitly, it is a very real possibility that Moses and Elijah will both actually come to earth again (just as they did in Matthew 17:3-4) as a precursor to the second coming of Christ.

Part of what makes the prophecy in Malachi tricky is that it seems to describe both the Incarnation (first coming) and Judgment Day (second coming) in the same breath. No hint of any separation in time. A careful reading of the last two chapters of Malachi shows that Jesus fulfilled part of this prophecy. But there is still an expectation of His glorious return and fulfillment of the rest.

Since this is the case, it is not out of bounds to believe that John the Baptist fulfills the first part while we should still be expecting a second coming of "Elijah" as a forerunner to the consummation of history in the return of the Lord.

We should view this as a "both/and" fulfillment. Then we can accept John as the prophesied coming of "Elijah" even if we are still expecting "Elijah" to return. The first time in "spirit and power," the second time in "truth and power" prior to the second coming of Christ.

Despite the initial appearance and claims by some, reincarnation is not what is being described. Hebrews 9:27-28 make it clear we should not be expecting a cycle of numerous rebirths and subsequent re-deaths.

And inasmuch as it is appointed for men to die once and after this comes judgment, so Christ also, having been offered once to bear the sins of many, will appear a second time for salvation without reference to sin, to those who eagerly await Him.


Even so, come Lord Jesus.